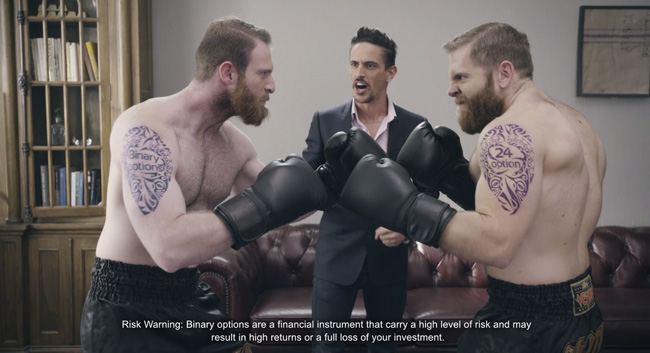 Media Agency Group and TV Advertising Media have once again worked with the world’s leading binary options broker, 24option, with a recent global television advertising campaign. Featuring commercials throughout Europe on some of the continent’s most popular stations, the campaign was planned to tie in with this month’s worldwide coverage of the 2015 Wimbledon tennis championships.

The 30 second advertisements have been aired on channels including Sky Deutschland’s Sky Sports 1, Beins Sport France, Canal Spain and France’s D8 channel. Advertising on popular international TV stations has guaranteed 24option a high exposure campaign that will help them to reach an influential audience on a global scale, with millions from all over the world tuning in to watch this year’s Wimbledon tournament.

The light-hearted and humorous television adverts focus on the idea that 24option is the number one choice for binary options, emphasising the broker’s status as the world’s most awarded binary trading platform. A range of advertisements feature as part of the exciting campaign along with informative ads showcasing 24option’s mobile service.

24option has been voted the world’s best binary options broker, and is the home for professional traders across the globe. Binary options is the latest and most profitable way to trade across global markets, offering a simple alternative to the often complex and daunting world of global finance. This latest European TV ad campaign will help to strengthen 24option’s brand presence across the continent with prime time advertising space secured by TV Advertising Media.

“Media Agency Group is very proud of our continued working relationship with 24option, and we’re all delighted with the recent global television advertising campaign. By advertising on some of Europe’s most popular television networks, the campaign has seen 24option reach potential customers around the world.”

Watch one of the ads below. You can view the rest of the advertisements on our TV Advertising Media YouTube channel.